skip to main | skip to sidebar

Zamora is back in Las Vegas with a limited run show.

Friday-Monday every week until the end of February 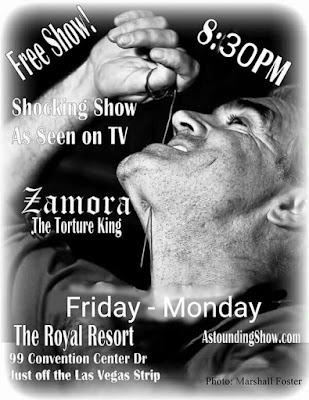 The original Vegas "freakshow" from the man who has been called "...the godfather of the modern circus sideshow."
Zamora The Torture King is laying down a cool hand at a small showroom at the Royal Resort Hotel - and his show is doing better than shows in Vegas casinos.
The word of mouth buzz is beating the paid corporate domination of Vegas shows.
"What a great show!! My son loved it! He talked about it the entire ride home and then some. It was tough getting him to bed for school, so he got me to promise we'd go see it again. He may wake up tired in the morning but he'll sure have some stories to tell his friends tomorrow!"
"We though the show was the best show that we've seen in our whole entire lives - even though I couldn't even watch half of it! So the half of the show that I did see was one of the best shows I've ever seen in my whole entire life."

You have seen him on Stan Lee's Superhumans and The Discovery Channel.

He has has appeared on TV shows in England, Germany, the Czech Republic, and Japan.

Know as Zamora The Torture King, his astounding show will shock and amaze you. It's the weirdest show in Vegas.

This is your chance to see these incredible feats live and close up, leaving no doubt that this is the real thing.

Warning: May be too intense for some viewers.

The show is at The Majestic Theatre on the second floor of The Royal Resort Hotel (99 Convention Center Drive), just off the Las Vegas Strip near Circus Circus.


Zamora the Torture King first came to Las Vegas in 2003. He was chosen by two Vegas show producers to star in the show SHOCK! at the Bourbon Street Casino on Flamingo road. It was the first show of its kind in Vegas. The show ran for years, at one point relocating to the former Debbie Reynolds Casino on Convention Center Drive.

For a history of Zamora in Las Vegas, CLICK HERE

Later, a slick producer tried to create a knock-off of the show, using performers who were self-admittedly imitating Zamora.  Despite better placement on the Vegas Strip, billboards around Vegas, illuminated advertising trucks and signs, promotional support from a major Vegas casino chain, the show closed in six months.

The general economic collapse of 2008 - combined with the failure of the knock-off show - made it that much harder for Zamora to work in Vegas, so he went on tour with various shows, eventually ending up in Europe.

Now Zamora has returned to Las Vegas, self-producing a "smaller is better" show at the Royal Resort Hotel that has already lasted longer - and done better financially - than a show shows that have been at major casinos on the Strip. This show in only contracted until the end of February,  so see it while you can.

Zamora's Vegas Sideshow runs until February 27th. The shows days are Friday, Saturday, Sunday, and Monday every week. Doors are at 8:00pm. The show starts at 8:30pm

The venue is not licensed to sell alcoholic beverages - however - you are allowed to BYOB.

For a history of Zamora in Las Vegas, CLICK HERE